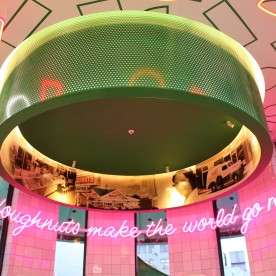 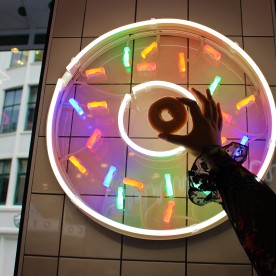 This world-famous doughnut and coffee chain first opened in 1937, and the brand is still going strong, having celebrated its 80th birthday last year (on 13 July). There are over 1,000 stores around the world – with New Zealand now in the mix, 35 countries selling these divine doughnuts!

In February, Krispy Kreme opened its first New Zealand store in Manukau and its second store last month at Auckland Airport’s domestic terminal. It has been a roaring success ever since! 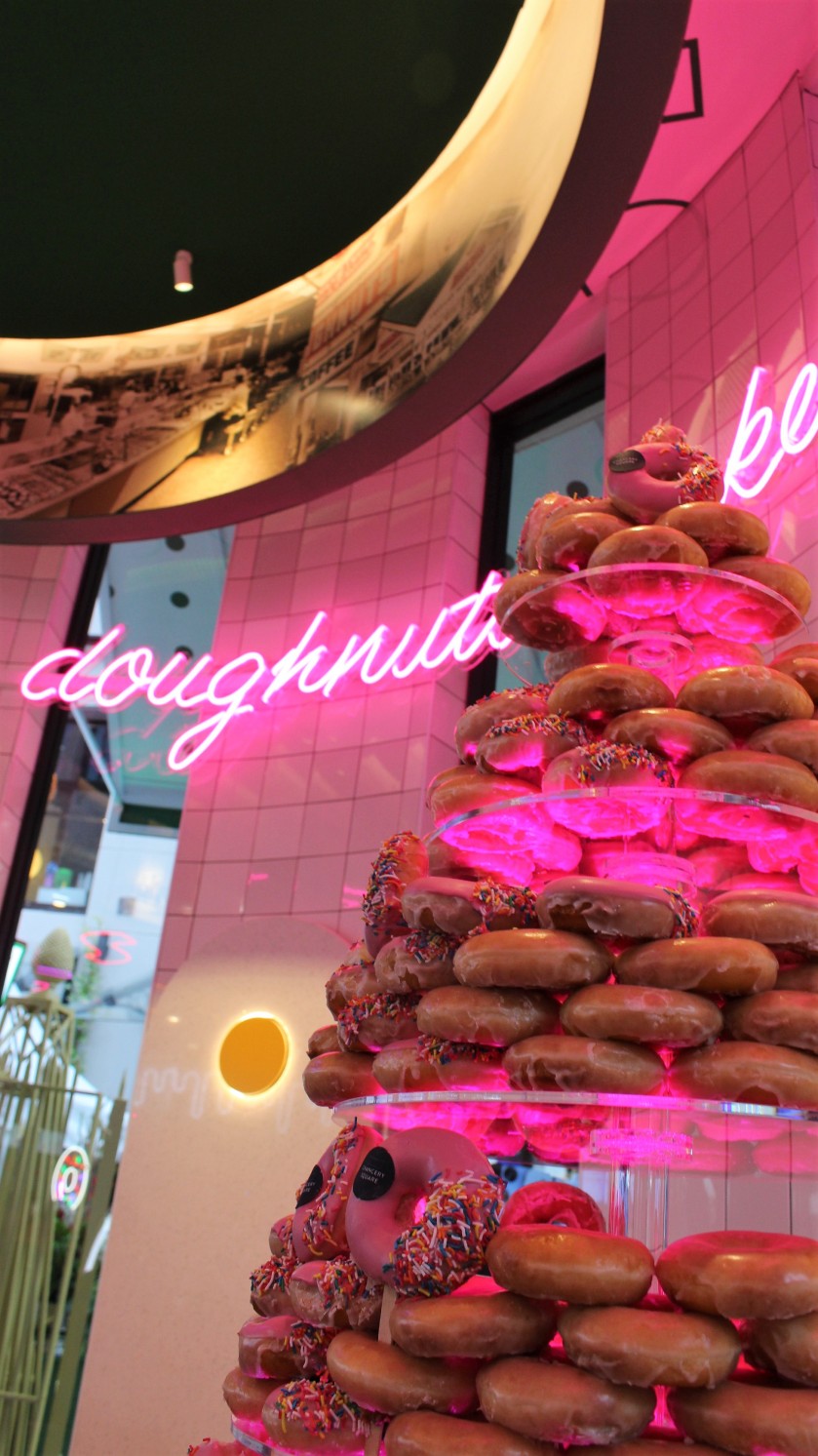 The new Krispy Kreme store in Chancery is extra special – it is not just a second store, but a brand-new look for Krispy Kreme – first of its kind in the world. It is Krispy Kreme like you have never experienced before! Are you excited yet?!
Details for the Grand Opening below…

Tonight, Evo and I went along to Krispy Kreme’s new store in Chancery for an exclusive sneak peak! This new branch is dubbed as the Kaleidoscope store and is super cool.

Set to be a more colorful sensory experience, the outside resembles the dozen doughnut box with Krispy Kreme’s iconic dots, and neon signage out front. The inside of the store is playful and fun – there is a ceiling of sprinkles, neon lighting and a giant pink doughnut seat. Sold.

There are many enticing doughnuts to choose from, such as Original Glazed, Caramel Iced, Caramel Delight, Kookies N Kreme and Strawberry Jam. Doughnuts range from $3 to $3.50 and if you get a box (say 4, 12 or 24), the price is cheaper per doughnut. Krispy Kreme have just brought out four new Christmas doughnuts, which are available in store now. These include: Krispymas Pudding, Wreath with M&M’s, Christmas Tree and Snowy, complete with a sour strap scarf – too cute! 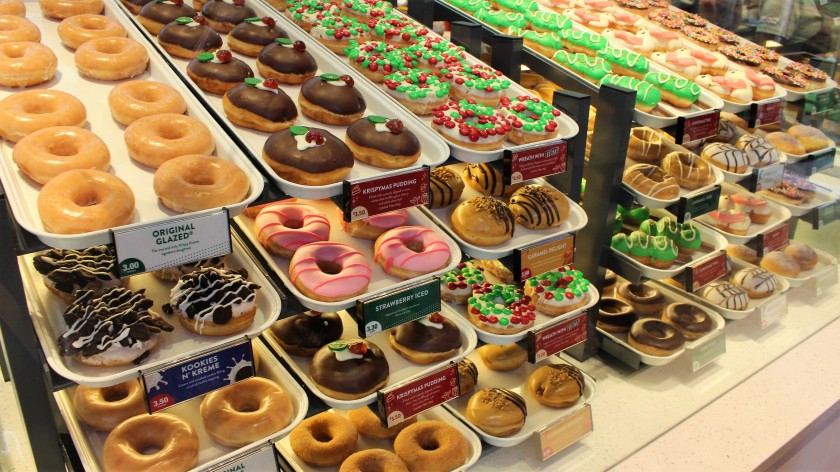 Coffee, Milkshakes, Thickshakes and Sundaes are on the menu too, plus my forever favourite Kreme Shakes. The best one (in my opinion) is the Original Glazed Kreme Shake, topped with whipped cream and a quarter mini glazed doughnut. It tastes EXACTLY like an Original Glazed Doughnut in liquid form. Swoon. Also highly recommend the Hokey Pokey, which has a nice chocolate-y taste and pieces of honeycomb to munch on. Yum! 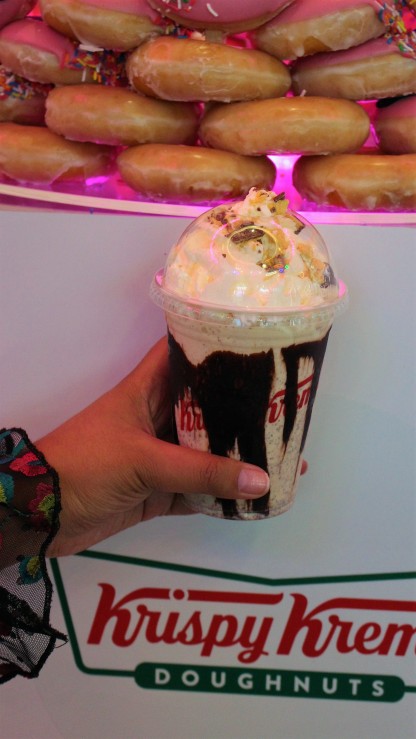 The Krispy Kreme Chancery Square store is also available on Uber Eats, giving users in Central Auckland the chance to get delicious doughnuts delivered to their door. Check out the pick up and delivery window below! 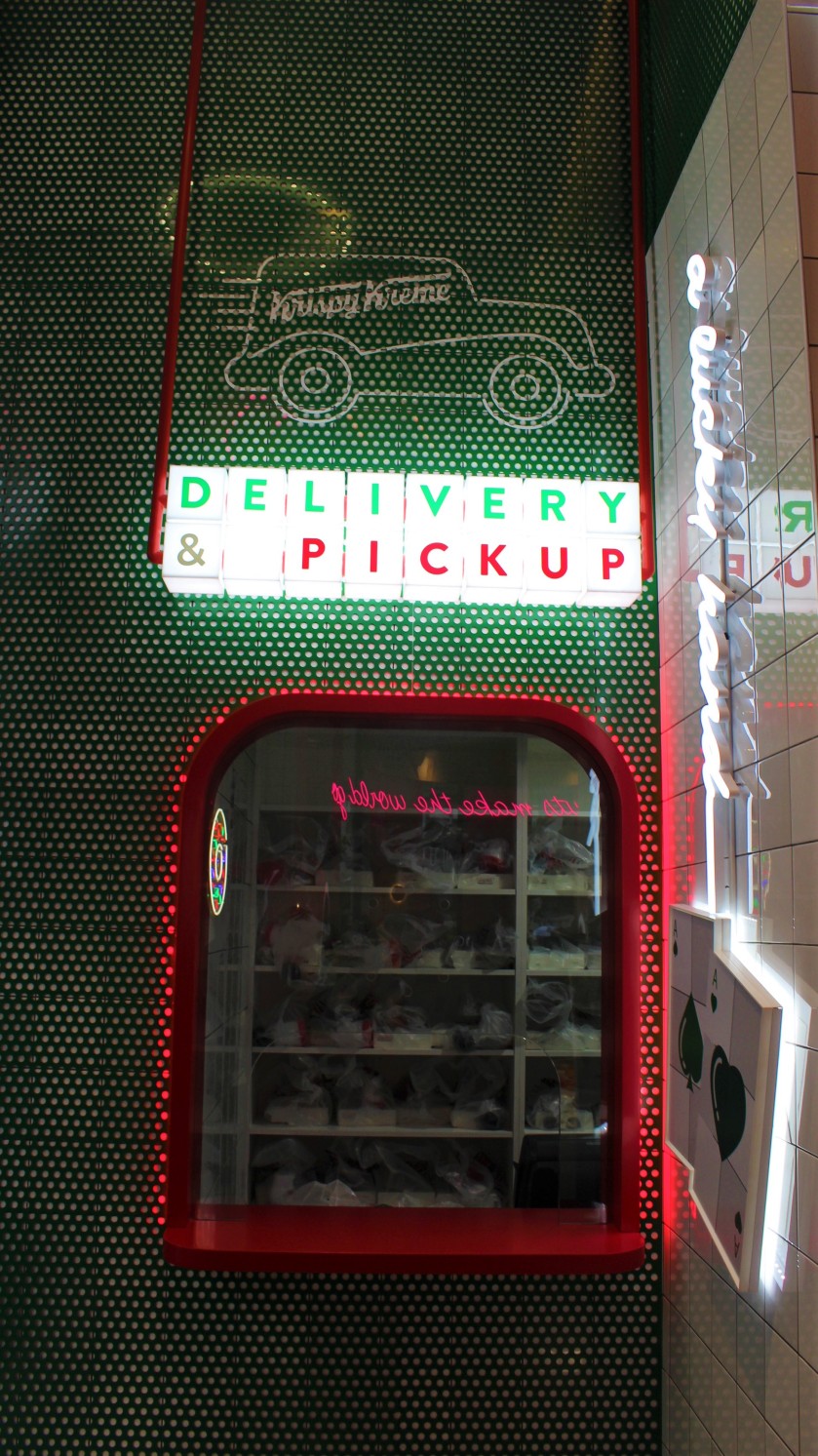 I am so excited about the new Krispy Kreme store in Chancery, Auckland CBD. I hope you enjoy it as much as I do!

Hi, I'm Georgie, a passionate foodie and blogger from Auckland, New Zealand. Check out my blog for eats, restaurant and cafe reviews and recipes! x